The Story of the Foundation Starts in the Future

António Champalimaud inspired what you see here in terms of the decisions that were made, and that structured the Foundation, the decisions that we take as we go along and the challenges to which we respond every day. In order to understand best what we must do, we consider who António Champalimaud was, and the level of ambition and courage with which he built his life. He is here in many forms. This is the Foundation he wanted to leave to the Portuguese.

The story of the Champalimaud Foundation begins in the mind of a visionary and enterprising Portuguese man. António de Sommer Champalimaud, a successful industrialist and financier, dedicated part of his legacy to building a world-class project in the field of biomedicine.

In his will, António Champalimaud left instructions about the management of the Champalimaud Foundation. Specifically, he named former Minister of Health, Leonor Beleza, as President, and indicated that she, together with Daniel Proença de Carvalho, lawyer and his long-time friend, should establish the fundamental rules for the operation of the institution. These included the definition of the statutes, the nomination of the full members of the first governing bodies and the direction to follow.

João Silveira Botelho and António Borges joined the President of the Foundation to constitute the first Board of Directors. Following their nomination, the first meeting of the General Council was held on June 14, 2005, and attended by leading international figures such as Mary Robinson. During the meeting, Daniel Proença de Carvalho was elected President of this body. This meeting marked the formal beginning of the creation process of the Foundation. During the public presentation of the General Council, Jorge Sampaio, then President of the Republic, referred to the Foundation as being “an example to change Portugal through science and research”.

Once the orientation and management of the Foundation were defined, the first challenge was to identify the areas that could most benefit from the sums bequeathed by António de Sommer Champalimaud. The importance of this choice could not be understated, since it would not only define the future of the Foundation, but also the destination that would be given to António Champalimaud’s will. The main source of inspiration was the personality of the Founder himself, and the Board of Directors tirelessly searched for the areas of intervention that best matched what António Champalimaud would have wanted. Some of the best and most prestigious institutes and personalities in the world were asked for advice. Thus begun a process of searching for answers, which involved internationally recognised centres of research and education (such as Harvard University and MIT), and entailed meeting with scientists and Nobel Prize laureates from different fields. Through these interactions, a robust network of friends, contacts, and advisors started to grow, which has been, since then, a source of support, guidance and inspiration. In parallel with these initial efforts, a study was also commissioned to analyse the prevalence of diseases at the national and international levels, as well as the distribution of funding throughout the medical sciences. After months of study and discussion, two specific areas emerged where the activity of the Foundation could have a huge impact: neuroscience and oncology. The growing number of disease instances associated with these two fields clearly indicated that the Champalimaud Foundation could make a difference in these areas. A third area emerged – blindness prevention – to deal with one of the major scourges affecting developing countries and that continually poses a challenge to researchers and doctors around the world.

It was in this field of blindness prevention that, in 2006, the Foundation established its first project. Attributed on a yearly basis, the 1,000,000-euro António Champalimaud Vision Award is the largest award given in this field and seeks to support the fight against blindness on two fronts – cutting- edge research and actions to prevent and fight blindness in the field, especially in developing countries – which reflect the Foundation’s commitment to translational science.

After the launch of the award by APJ Kalam, former President of India, the first edition of the António Champalimaud Vision Award was presented to the Aravind Eye Care System during a ceremony that took place in Lisbon on September 7, 2007. The award has gained international importance year after year, helping those who strive to alleviate the burden of ocular disease in individuals and society.

The Story of the Foundation Begins in the Future

Getting down to work

In 2007, the Foundation initiated its research activity with the launch of the Champalimaud Neuroscience Programme (CNP). Initially housed in the Gulbenkian Institute of Science, this programme was designed to foster major scientific talent in the search for the neural basis of behaviour, and thus advance our knowledge of a highly complex field: the human brain. To complement this research, the CNP and the Champalimaud Foundation created a strong advanced educational programme. To this end, the International Neuroscience Doctoral Programme (INDP) was launched in partnership with the Gulbenkian Foundation and the Portuguese Foundation for Science and Technology.

Shortly after its research in neuroscience began, the Foundation inaugurated, on January 30, 2008, a collaboration with the first vision centre located in Hyderabad, India: the C-TRACER – Champalimaud Translational Centre for Eye Research. The C-TRACER network, created to promote advanced research in ophthalmology, currently comprises three centres – in India, Portugal and Brazil. Following the inauguration of the first C-TRACER, and at a time when the Foundation’s activities were gaining momentum and results, one of its most relevant projects in terms of taking science to the general public began.

Launched in April 2008, the Champimóvel (Champimobile) is a mobile and interactive experiment that takes children on a three-dimensional journey through the human body. It stimulates their imagination, introducing them to the most recent topics in modern medical science.

At the end of 2008, one of the Foundation’s most significant milestones was reached. In Lisbon, on October 5, the first stone was laid for the construction of the Champalimaud Centre for the Unknown – a state-of-the-art hub for research and clinical services.

With projects already ongoing in neuroscience, vision and education, the Foundation entered the year 2009 with the ambition of also initiating activities in oncology, the goal being to become one of the world’s major players in the field. In May 2009 the first Champalimaud Cancer Research Symposium contributed to this aim by hosting Nobel laureates and participants from all over the world. Following up on the success of the first symposium, the Foundation made its first direct investment in cancer research, through its Champalimaud Metastasis Programme.
In the early phases of this programme, the Champalimaud Foundation collaborated with various institutions to create and finance advanced research programmes.

The Story of the Foundation Begins in the Future 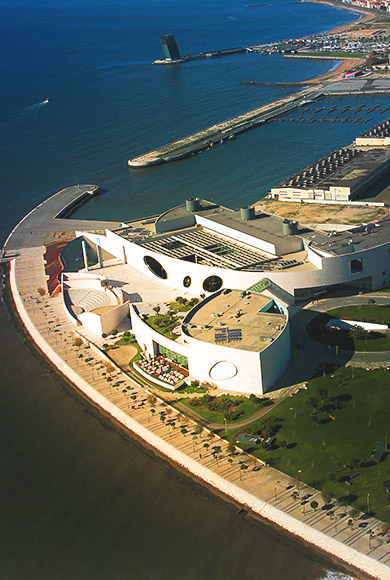 In 2010 the Foundation started to build its facilities and its working environment in order to reflect its philosophy and ambition. Two years after construction began, the Champalimaud Centre for the Unknown (CCU) was officially inaugurated on the centenary of the Portuguese Republic and in the presence of the President of the Republic, several Nobel laureates, collaborators, friends and colleagues – all those who had supported and accompanied the Foundation’s journey through its early years.

A few months after the inauguration of the Champalimaud Centre for the Unknown, the Champalimaud Clinical Centre welcomed its first patients and began its mission to provide care of excellence in oncology and neuropsychiatry, anchored in programmes of translational research.

Today, the Champalimaud Centre for the Unknown has become a landmark, not only on the landscape of Lisbon’s riverside, but also on the map of international science. In 2012, The CCU was elected by the north-American magazine, “The Scientist”, as the best place, outside the US, for researchers to develop their post-doctoral work.

At the Clinical Centre, the radiotherapists are one of the few teams in the world who put into practice the most advanced forms of image-guided “single dose” radiotherapy, allowing patients to receive treatment in a single session of just few minutes.

The Champalimaud Foundation is also a leader in terms of innovative surgical solutions, particularly robotic surgery, laparoscopic and microscopic procedures, development of innovative projects that aim to solve the most pressing of today’s health problems. We do not know what the future has in store for us, but we honour the commitment to place the resources, the inspiration and the determination of the Founder at the service of the mission we adopted, and to do everything within our reach to improve the quality of life, health and well-being of humankind.