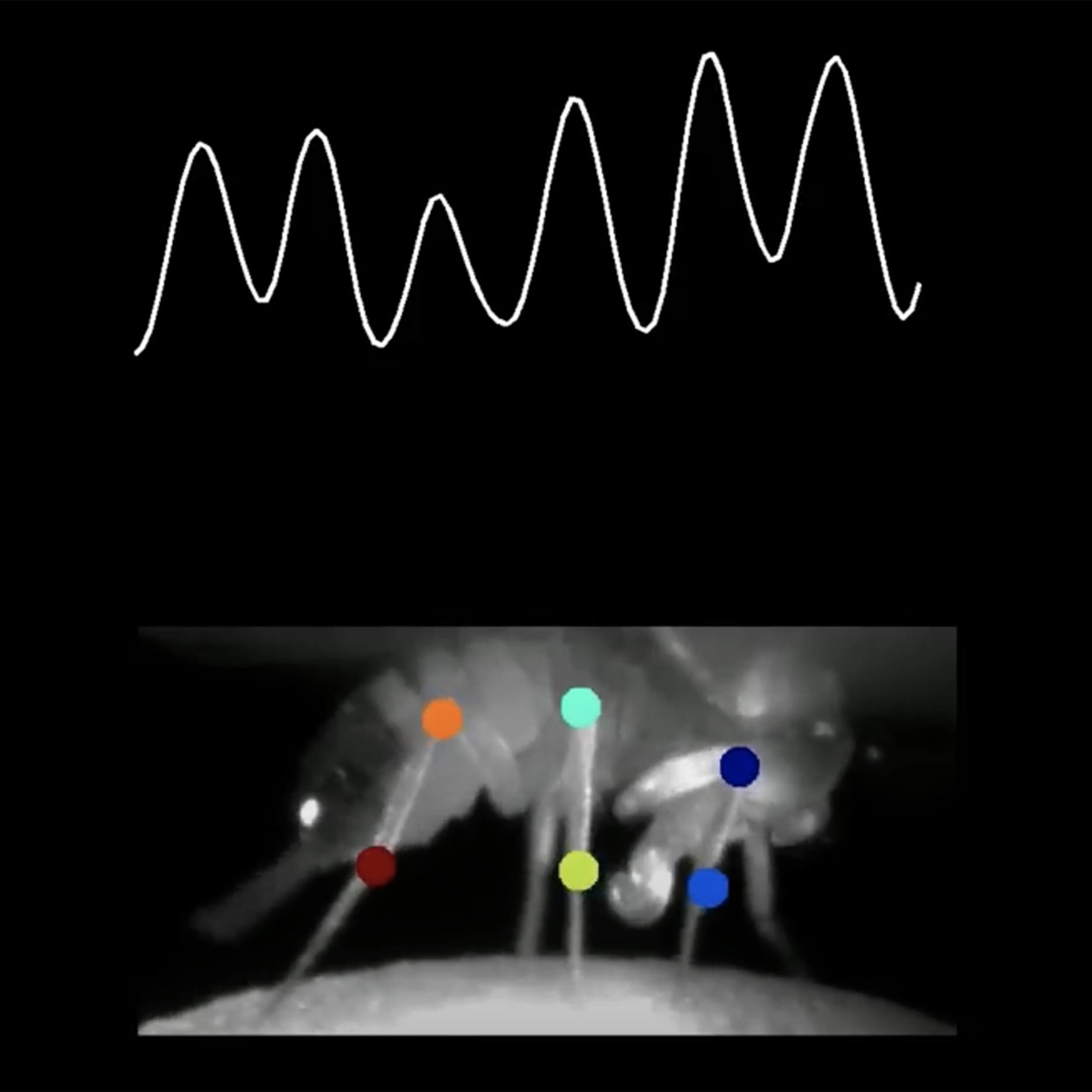 A fruit fly walks on a small styrofoam ball fashioned into a floating 3D treadmill. The room is completely dark, and yet, an electrode recording visual neurons in the fly’s brain relays a mysterious stream of neural activity, rising and falling like a sinusoidal wave.

When Eugenia Chiappe, a neuroscientist at the Champalimaud Foundation in Portugal, first saw these results, she had a hunch her team had made an exceptional discovery. They were recording from visual neurons, but the room was dark, so there was no visual signal that could drive the neurons in that manner.

“That meant that the unusual activity was either an artefact, which was unlikely, or that it was coming from a non-visual source”, Chiappe recalled. “After the possibility of interference was investigated and dismissed, I was sure: the neurons were faithfully tracking the animal's steps.”

A few years and many new insights later, Chiappe and her team now present their discovery in the scientific journal Neuron: a bi-directional neural network connecting the legs and the visual system to shape walking.

"One of the most remarkable aspects of our finding is that this network supports walking on two different timescales simultaneously", said Chiappe. "It operates on a fast timescale to monitor and correct each step while promoting the animal’s behavioural goal."

“Vision and action may seem unrelated, but they are actually tightly associated; just choose a point on the wall and try placing your finger on it with your eyes closed”, said Chiappe. “Still, little is known about the neural basis of this link.”

In this study, the team focused on a particular type of visual neuron that is known to connect to motor brain areas. “We wanted to identify the signals that these neurons receive and understand if and how they participate in movement”, explained Terufumi Fujiwara, the first author of the study.

To answer these questions, Fujiwara used a powerful technique called whole-cell patch recording that enabled him to tap into the neurons’ “mood”, which can be either “positive” or “negative”.

“Neurons communicate with each other using electric currents that alter the overall charge of the receiving neuron. When the neuron's net charge is more positive, it is more likely to become active and then transmit signals to other neurons. On the other hand, if the charge is more negative, the neuron is more inhibited”, Fujiwara explained.

On a fast timescale: Watching each step

The team tracked the neurons’ charge and revealed that it was synched to the animal’s steps in a manner that was optimal for fine-tuning each movement.

“When the foot was up in the air, the neuron was more positive, ready to send out adjustment directions to the motor region if needed. On the other hand, when the foot was on the ground, making adjustments impossible, the charge was more negative, effectively inhibiting the neuron”, said Chiappe.

On a long timescale: Keeping the course

When the team analysed their results further, they noticed that charge of the neurons was also changing on a longer timescale. Specifically, when the fly was walking fast, the charge became increasingly more and more positive.

“We believe that this variation helps maintain the animal's behavioural goal”, said Fujiwara. “The longer the fly has been walking fast, the higher are the chances that it would need help to maintain this action plan. Therefore, the neurons become increasingly 'more alert' and ready to be recruited for movement control".

The brain is not always the boss

Many experiments followed, creating a fuller description of the network and demonstrating its direct involvement in walking. But according to Chiappe, this study goes even further than revealing a new visual-motor circuit, it also provides a fresh perspective on the neural mechanisms of movement.

"The current view of how behaviour is generated is very 'top-down': the brain commanding the body. But our results provide a clear example of how signals originating from the body contribute to movement control. Though our findings were made in the fly animal model, we speculate that similar mechanisms may exist in other organisms. Speed-related representations are critical during exploration, navigation, and spatial perception, functions that are common to many animals, including humans", she concluded.

Caption: Visual neurons in the brain of a fruit fly follow the step cycle of the animal // Credit: Terufumi Fujiwara & Eugenia Chiappe, Champalimaud Foundation.
Back