Searching for the fine details of the complex interplay between cancer, metastases and their environment

The 2022 edition of the Champalimaud Research Symposium (CRSy2022) took place under the title “Tumour Microenvironment: from Cancer Initiation to Metastasis”. It showed that researchers are making progress at understanding how a tumour’s surrounding environment influences cancer formation, growth and treatment – making it a very timely event. 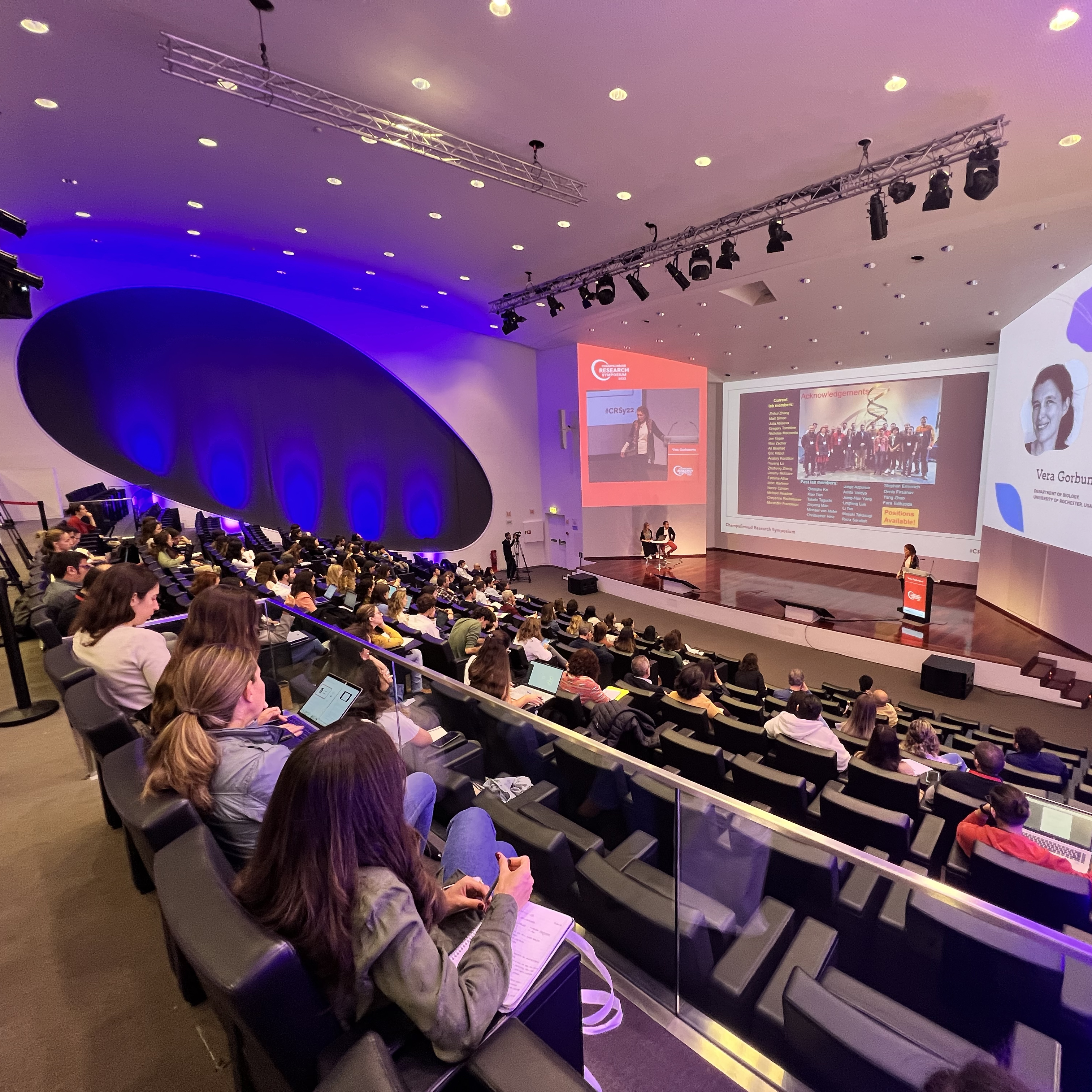 Everything around a malignant tumour and its metastases, from its so-called microenvironment to the patients themselves as individuals, influences cancerous growth, and ultimately the outcome of the disease. This is the take-away message from CRSy2022 – the three-day international scientific symposium that took place at the Champalimaud Foundation, in Lisbon, from 19 to 21 October.

If proof were needed of this new trend in cancer research, the 24 scientists who addressed the Champalimaud auditorium audience, as well as online participants, over three days, were evidence enough of the research interest generated by the tumour environment – and not only at the microscopic, but at the macroscopic level as well – including the patient’s whole body and even the patient’s psycho-social circumstances.

Here are some of the highlights of the event.

On the first day, Vera Gorbunova, a molecular biologist specialised in ageing from the University of Rochester, gave a fascinating talk about longevity and cancer resistance. More to the point: why do certain very long-lived animals, such as the naked mole-rat (a small rodent that can live for more than 30 years) and the bowhead whale (weighing around 60 tons, it is the most long-lived being on the planet, having been observed to reach the age of 211 years!) never or almost never develop cancer?

This is actually paradoxical, since the longer an animal (or a person) lives, the higher the probability of developing cancer due to DNA replication errors during cell division. By the way, elephants, which have a lifespan of up to 70 years, are also astonishingly resistant to malignant growths. In their case, it is because they have additional copies of the tumour suppressor gene p53. But bowhead whales and other species (including humans) do not.

“If the bowhead whale did not evolve additional tumor suppressor genes”, said Gorbunova, “how come they have no tumours?” In pursuing her work to understand why naked mole-rats and bowhead whales are so good at resisting cancer, Gorbunova and colleagues hypothesised that they must use other, uncommon, defence mechanisms against cancer. 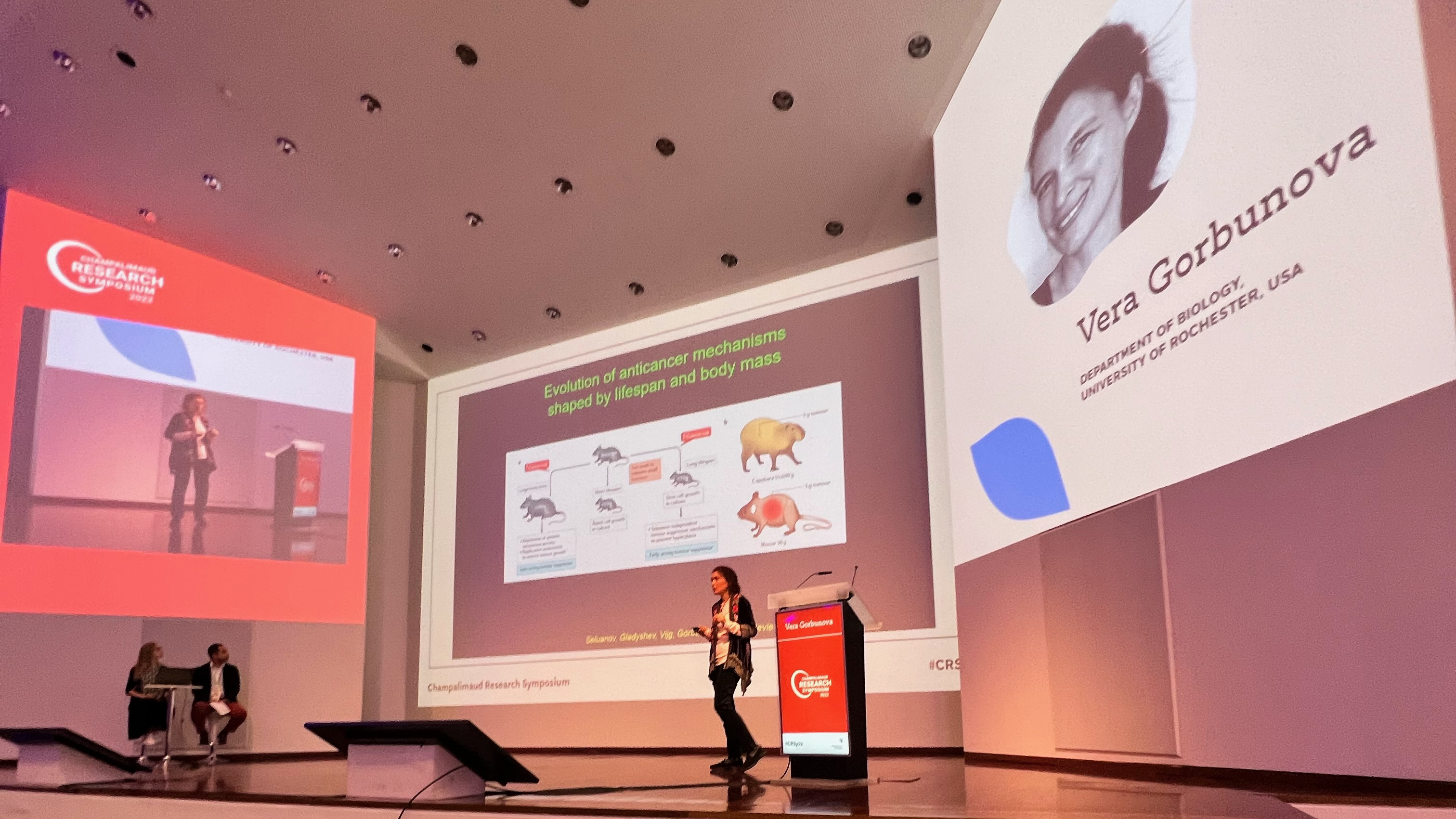 They discovered that naked mole-rats get their cancer resistance from a molecule – the well-known skin-cosmetics ingredient hyaluronic acid – which in these animals “is five times the size of those in mice, rats and humans” and accumulates abundantly in naked mole-rat tissues. Why? Probably because their skin needed cutaneous plasticity to be able to live in underground tunnels without wounding itself. Lucky for them, this “high molecular weight” hyaluronic acid is also a powerful anti-cancer and longevity-promoting compound.

As for the bowhead whale, it has evolved another anti-cancer mechanism altogether: more efficient DNA repair. Gorbunova and her team showed that a protein called “cold-inducible RNA-binding protein” (CIRBP), which is extremely good at repairing double breaks in DNA, is much more abundant in bowhead whales than in other species. “These whales live in cold water – and we can potentially benefit from this. It could be one explanation why cold showers and bathing in icy waters are good for us”, concluded Gorbunova.

Switching on cancer, switching off cancer

On the second day, the most eagerly-awaited speaker was probably Gerard Evan, from Cambridge University, and his keynote talk, titled “Making and breaking cancers” – or in other words, where cancers come from and how to make them go away. 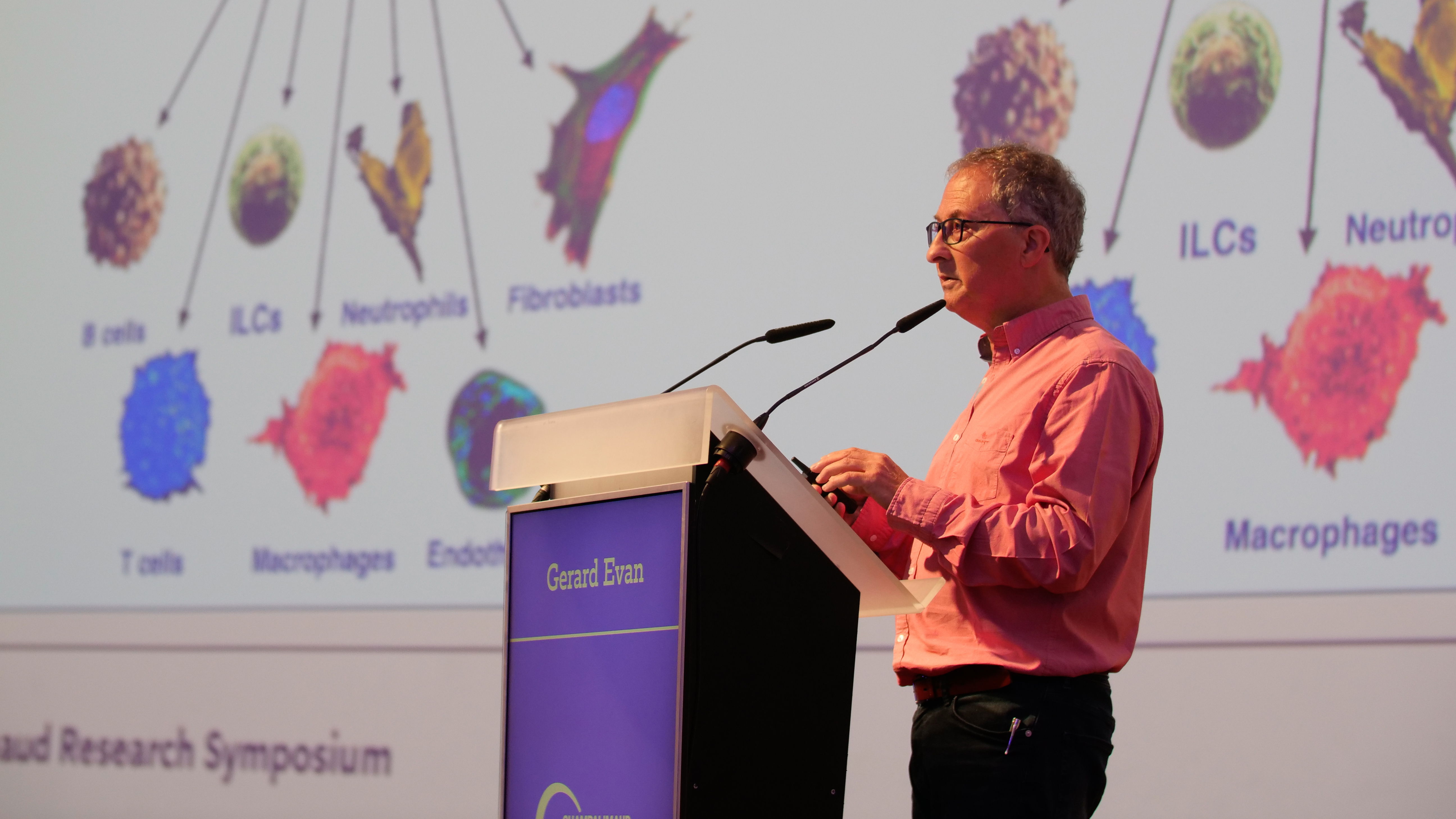 Evan has studied one cancer-promoting gene (or oncogene) in particular – c-Myc –, for decades, in the discovery of which he was one of the participants. “[C-]Myc is a requirement for cancer maintenance common to many, diverse cancers”, he said during his talk. This means that future treatments based on c-Myc could work on a wide variety of cancers.

But c-Myc also has a role in normal cell function, and when it is activated (switched on) in the right place at the right time, it promotes normal cell proliferation.

Earlier in his career, Evan obtained a very intriguing result: that, depending on the surrounding conditions, c-Myc activation could make cancer cells “commit suicide” (through a mechanism called apoptosis) instead of proliferating out of control. Which means that it can perform two absolutely contradictory tasks, being an oncogene and an anti-cancer gene at the same time. How is this possible?

“Evan’s work showed that cancer cells exist in a delicate balance of life and death, depending on the conditions they’re growing in”, explains an article on the website https://news.cancerresearchuk.org/, the British agency that today funds Evan’s research. And they add: “Because the same gene promotes cell growth and causes cell death, just a small push in one direction or the other tips the balance. Evan’s work showed that, although c-Myc is an oncogene, just a tiny change in the tumour microenvironment can trigger cancer cell suicide under its influence”. Or, in Evan’s own words, c-Myc is able to “stop a developing tumour in its tracks”.

So in his quest for using c-Myc as the target of new cancer treatments, he has been “trying for a long time”, he said, “to interest people in c-Myc inhibition”. And he added: “It’s very exciting, but we are not there yet.”

The search for breast cancer biomarkers that make a difference

The third and last day of the symposium started out with a keynote talk by researcher and medical oncologist Fatima Cardoso, director of the Breast Unit at the Champalimaud Foundation. Her talk was, overall, an appeal for basic researchers to find new and useful “predictive biomarkers”; that is, molecules, chemical signals from the tumour, “that will allow doctors to predict how a cancer will respond to a treatment before we give it” to a patient. 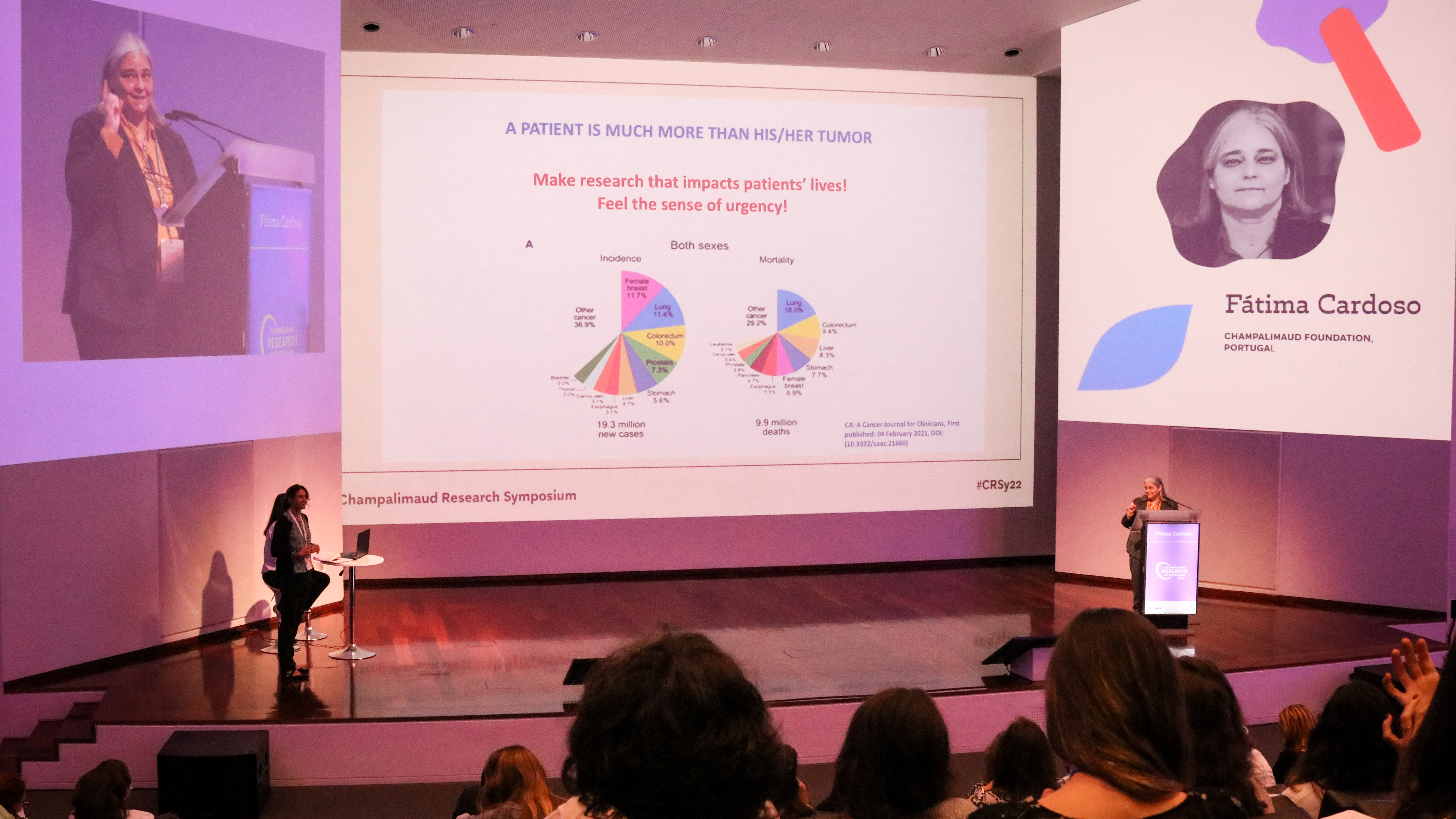 To give an idea of the current situation concerning the decision to administer chemotherapy in breast cancer, Cardoso pointed out the results of the European clinical trial MINDACT, coordinated by the international TRANSBIG consortium, and in which the Foundation’s Breast Unit participated. MINDACT was designed to clinically validate a breast cancer genomic test, called MammaPrint, based on the 70 most important genes associated with breast cancer recurrence, or relapse. The results showed that “in 46% of the patients classified as high risk [for relapse], you could avoid giving chemotherapy”, she stressed.

She talked about other potential ways to approach the problem of breast cancer treatment optimisation and personalisation, such as the increasing use of zebrafish larvae as animal “avatars” of individual patients, into which you introduce the patient’s tumour, submit the fish larvae to different treatments and compare the results. She also referred to the use of tumour cell-derived extracellular vesicles, which are small sacks containing all sorts of material from the individual patient’s tumour, as potential tumoural makers.

More generally, Cardoso emphasised the importance of a “continuum of data”. From the tumour’s microenvironment to the patient’s psychological and social environment, to patient-reported data, this mass of information would be integrated into a “library of digital patients or avatars” (already in construction at the Breast Unit) that could then be mined with the help of Artificial Intelligence. It would thus be possible to extract information about how similar patients were treated and what their outcome was, in order to assist decisions about yet untreated individual patients. “This is closer to the clinic than you can imagine”, Cardoso said, highlighting that “a patient is much more than his or her tumour”!

“What is the role of the host in cancer?”, Cardoso went on, answering her own question by saying that interactions between the microenvironment, the hormonal and the immune components in breast cancer “are still missing for clinical implementation”.

Adding that she sensed “some loss of urgency” from experts, Cardoso stressed that 10 million people die of breast cancer each year in the world (the equivalent of Portugal’s population). “Maybe being more targeted would be better than going on fishing expeditions” for predictive biomarkers, she said, stressing the importance of “translating lab results into the clinic”, something which has not yet happened “22 years after we started talking” about translational research. The clinic and the lab “are still apart”, she concluded.

The last talk of the conference was the keynote lecture on “Dormancy and outbreak of metastasis initiating cells” by Joan Massagué, from the Memorial Sloan Kettering Cancer Center. 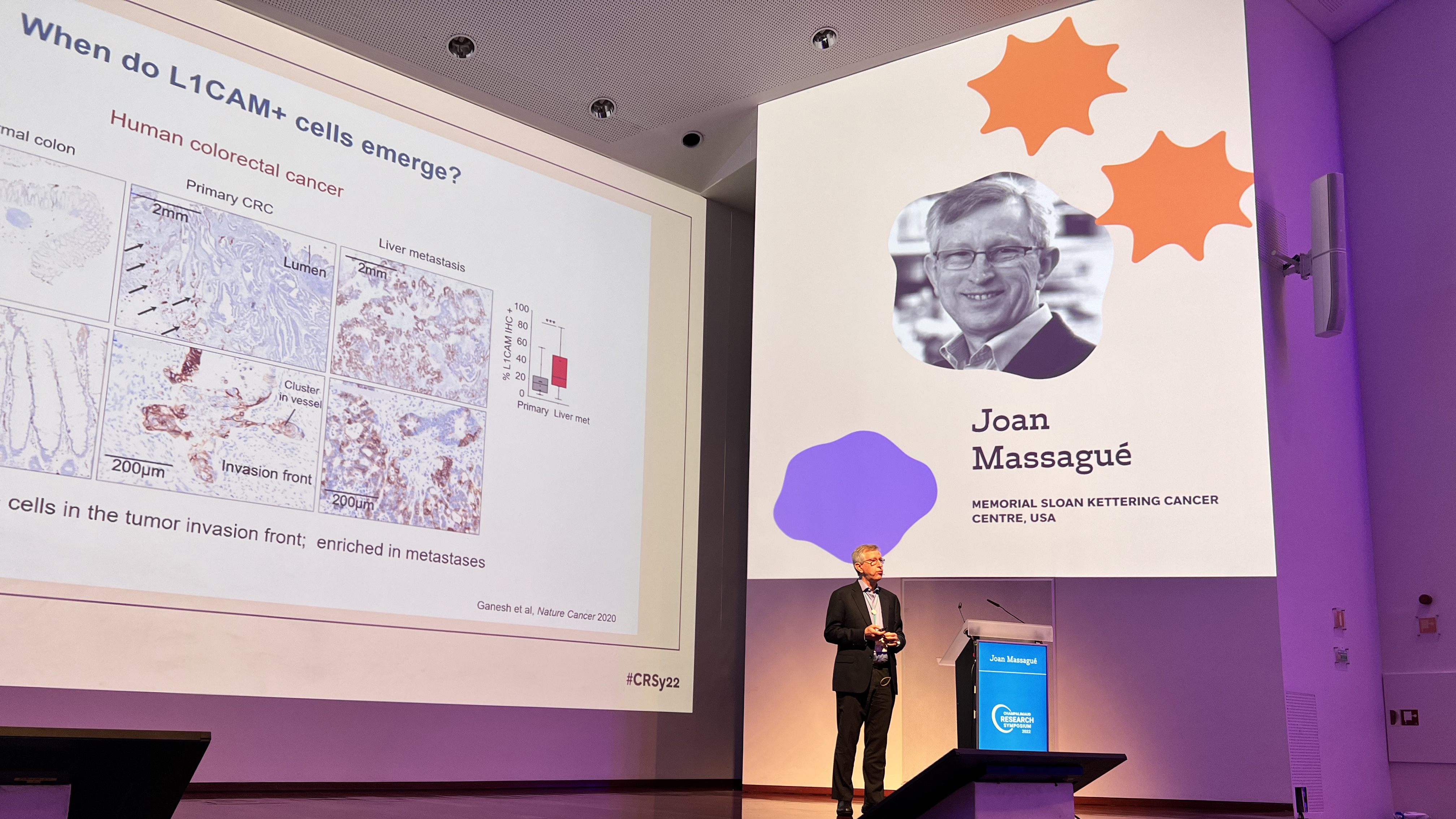 “Metastases are harder to treat than primary tumours”, he started by saying. “How could we prevent and treat cancer relapse?” One of the problems is that genetic mutations do little to explain how and where metastasis occurs. “No single metastasis causing mutation has been identified”, added Massagué. “And there is evidence that neural, immune, endocrine factors also impact metastasis formation.” A key idea, for Massagué, is that “cancer and metastases are a whole-body problem”.

“Is it possible to target nascent metastases, to eliminate dormant metastases?”, he asked. To answer this question, he has been focusing his research on one particular protein – L1CAM –, which is normally expressed only in neurons. But in fact, L1CAM expression has been observed in all types of cancer cells, and its high abundance is related to metastases. Moreover, L1CAM plays an important role in the inflammation processes that occur in the non-cancerous tissue surrounding a tumour.

It is also thought that L1CAM may make cancer cells become detached from each other and start migrating to other parts of the body. In view of these findings, one may hypothesise that blocking L1CAM might inhibit cancer cell migration and tumour progression. But potential therapies involving L1CAM as a target in human cancer are still being researched in the lab.

We cannot end this overview of CRSy2022 without briefly mentioning a number of intriguing ideas that were voiced by other speakers during the three days of the symposium.

Michelle Monje-Diesseroth, from Stanford University, pointed out that normal neural activity in the central and peripheral nervous system can promote cancer; Jeffrey Pollard, from the University of Edinburgh, that immune cells such as macrophages can be subverted to become “traitors” and promote every step of metastasis formation; Héctor Reinaldo Selgas, from CNIO, that tumour-derived extracellular vesicles influence premetastatic niche formation in the lymph nodes; and Salvador Aznar Benitah, from the Barcelona Institute for Research in Biomedicine, that palmitic acid, the major component of palm oil, greatly increases the risk of metastasis formation.

We should certainly keep an eye on all these promising research avenues in the field, which could in the future pave new paths for clinical research and applications that might result in actual benefits to patients suffering from cancer.