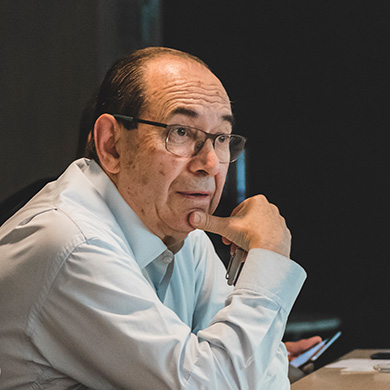 José Cunha-Vaz, M.D., Ph.D. is Emeritus Professor of Ophthalmology of the University of Coimbra, Portugal, and President of the Association for Innovation and Biomedical Research on Light and Image (AIBILI), a not-for-profit Clinical Research Organization. He is now Honorary Editor of Ophthalmic Research, Coordinator of the Diabetic Retinopathy and Retinal Vascular Diseases Section of the European Vision Institute Clinical Research Network (EVICR.net).

He became Chair and Director of the Department of Ophthalmology at the University of Coimbra Hospital in 1972.

In 1979 Dr. Cunha-Vaz moved to the United States to become a full-time Professor of Ophthalmology and Director of the Retina Service at the University of Illinois at Chicago until his final return in 1986 to Portugal. He returned to his original position, Professor of Ophthalmology and Head of Department of Ophthalmology of the University of Coimbra (1972-2008) creating in 1994 a large Research Institute dedicated to vision research, the Institute of Biomedical Research on Light and Image (IBILI) and the Association for Innovation and Biomedical Research on Light and Image (AIBILI) a not-for-profit clinical research center.

Dr. Cunha-Vaz’s work has included laboratory and clinical research in retina and intraocular fluids with special emphasis on blood-retinal barriers and diabetic retinopathy. He was the first to identify the anatomical basis of the Blood-Retinal Barrier and initiated its clinical measurement by developing vitreous fluorometry and multimodal macular mapping. His contributions have continued with the identification of different phenotypes and novel biomarkers of diabetic retinopathy. He has been PI for research grants funded by NIH (USA), FCT (Portugal) and European Union Research Programmes. He participated as PI in a large number of studies, especially involving therapies for retinal diseases (ETDRS, RESOLVE, EOP1013, etc.).

Dr. Cunha-Vaz has authored and co-authored over 500 peer-reviewed papers and books. He was elected member of Academia Ophthalmologica Internationalis in 1994. He is a founding member of the European Academy of Ophthalmology (2004). He has received the Diaz Caneja Prize of the University of Valladolid (1993), the Paul Henkind Award of the Macula Society (1998), the Alcon Research Institute Award (1998), the Eva Kohner Award from the European Society of Diabetes (2008), Helmholtz Medal of the