Dr. J. Anthony Movshon, Director of New York University’s Center for Neural Studies, and Dr. William T. Newsome, Investigator at The Howard Hughes Medical Institute and Professor of Neurobiology at Stanford University, are the 2010 António Champalimaud Vision Award Laureates. The 2010 Vision Award recognises the work of both Dr. Movshon and Dr. Newsome over the last 30 years. Working at times together and at other times separately, these outstanding researchers have had a major impact on scientists’ understanding of how the brain reconstructs images, so that human beings can perceive, interpret and act in the world. By building a bridge between psychophysics and human behaviour on the one hand and the physiology of individual neurons and what they compute on the other, these two neuroscientists have shed ground-breaking light upon how the brain reconstructs visual images.

Leonor Beleza, President of The Champalimaud Foundation, said, “Visual perception starts with the eyes, but it happens in the brain. Over a 30 year period, the work of Dr. Movshon and Dr. Newsome has taken this axiom to new scientific levels of understanding. Because of these two outstanding neuroscientists, we now have a fundamental appreciation for the role of neurons in how we see things move about in the world. Their ground-breaking work, taken together and individually, has laid the basis for continued research on how the brain and its processes impact vision and perception. We are very proud to recognize Drs. Movshon and Newsome as the recipients of the 2010 Champalimaud Vision Award.”

In his early studies, Dr. Movshon contributed to the understanding of how the brain represents the form and motion of objects, identifying for the first time neural circuits computing motion perception in the brain’s middle temporal lobe (MT). In a joint 1989 study, that is today considered a classic, Drs. Movshon and Newsome demonstrated that neurons in the MT visual area are responsible for perceptual judgments about direction. By monitoring neuron responses, they could accurately predict decisions about perception, thus linking perception to specific activity within a neural circuit. Dr. Newsome demonstrated that by altering the activity of neurons, perceptual performance could be either improved or diminished.

These studies proved that the activity of neurons in the brain’s MT is necessary in order for human beings to see moving objects in the world. By unequivocally demonstrating this fact, Drs. Movshon and Newsome paved the way for studies of the mental processes that link perception to action and for a greater understanding of the complex computations that underlie human decision-making and behaviour. 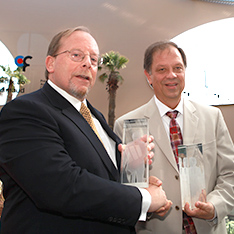