Between them, the 2013 Antonio Champalimaud Vision Award recipients are responsible for organising and training the majority of eye care workers, and for delivering the majority of the cataract surgical and related eye care services (including coordination and training) critical to the elimination of avoidable blindness in Nepal.

Nepal Netra Jyoti Sangh (NNJS) was set up in 1980 with the aim of executing and coordinating a programme to combat eyesight-related problems in the country. Since then it has played a fundamental role in the orientation and coordination of 14 hospitals and 60 treatment centres spread throughout the Nepalese provinces, articulating all the prevention work and the provision of healthcare.

NNJS actively monitors the various institutions and programmes it created to combat vision disorders in Nepal, and plays an important role in publicising the problem, mobilising resources, and enrolling the participation of the local populations.

NNJS has received support from, among others, the Seva Foundation, na international non-profit organisation operating in 15 countries with the objective of preveting blindness and restoring vision.

Dr. Ram Prasad Pokhrel, ophthalmologist and founding member of NNJS, has given more than 40 years to his role of defining and implementing national eyecare plans. His work has had a direct social and economic impact on the areas affected by vision disorders.

Working within the network created by NNJS, the Eastern Regional Eye Care Programme and the Lumbini Eye Institute have also been recognised by the 2013 award.

The Eastern Regional Eye Care Programme is a treatment programme which is implemented by a combination of two ophthalmologic hospitals, Sagarmatha Choudhary Eye Hospital (Lahan) and Biratnagar Eye Hospital, and their 7 satellite clinics, offers high quality services to the populations of the eastern region of the country. The Sagarmatha Choudhary Eye Hospital (SCEH) started out in 1983 as a small eye care unit with 12 beds, and currently has more than 400 beds and 5 satellite clinics. Since it was created in 2006 the Biratnagar Eye Hospital (BEH) has grown to its current 450 beds, geared towards providing high quality ophthalmologic services to the poorest sectors of the population of Nepal.

A number of international organisations have contributed to the success of the Eastern Regional Eye Care Programme, in particular Christoffel-Blindenmission (CBM), an organisation which strives to improve quality of life and eliminate the barriers faced by those in need in the poorest countries of the world.

The Lumbini Eye Institute operates in the central and western region of Terai. Created in 1983, this institute, which started out as a small clinic with only two rooms, one doctor and a staff of three, is currently one of the most successful cases among the ophthalmologic centres of Nepal. With 215 beds, this hospital performs between 75 and 170 different types of eye surgery every day. The Lumbini Eye Institute developed its activities with the support of the Seva Foundation.

The fourth institution recognised by this year’s award is the Tilganga Institute of Ophthalmology, an organisation primarily serving the Kathmandu Valley, but also reaching many mountainous and isolated communities.

Created in 1992 to carry out the Nepal Eye Programme, Tilganga’s aim was to be a model for investigation, treatment and the training of professionals in the area of the prevention and treatment of eyesight problems. It currently has a clinic that can provide the most advanced services to ophthalmologic patients; it has an education and training department; a unit which manages the various centres and small clinics scattered among the rural community of Nepal and neighbouring countries; an ophthalmologic bank to provide corneas for transplant and to make the population aware of the need for donors; a factory of material necessary to perform the most advanced operations on cataracts with high quality and low cost.

Dr. Sanduk Ruit, Founerr and Director of the Tilganga Institute of Ophthalmology is an ophthalmic surgeon of world renown and a leading figure in Nepalese medical society. He was the first Nepalese doctor to implant intraocular lenses in cataract surgery, having also developed a pioneering method of achieving high quality, low cost ophthalmologic procedures in remote areas and in often adverse conditions.

Dr. Ruit, along with Dr. Geoffrey Tabin, is also the co-Founder of the Himalayan Cataract Project. Together, Drs. Ruit and Tabin established the ambitious objective of working to completely eliminate avoidable and treatable blindness in the Himalayan region.

In addition, Tilganga has actively collaborated with the Fred Hollows Foundation, an organisation active in Africa, Asia and Australia, which has contributed to the reduction of the cost of cataract surgery, helping restore vision to over 1,000,000 people worldwide.

Together, the four recipients of the 2013 Champalimaud Vision Award have contributed to a dramatic change in the paradigm of ophthalmologic care in Nepal. From 1000 rudimentary surgeries carried out in 1981, the number of surgical procedures has increased exponentially over the last 30 years, with over 250,000 high quality interventions now carried out each year. The growth in quality of these surgeries has been accompanied by a significant reduction in cost. Thanks to these four organisations, and despite its challenging geography and often unstable political landscape, Nepal has managed to significantly decrease its prevalence of blindness and change the lives of many of its citizens. 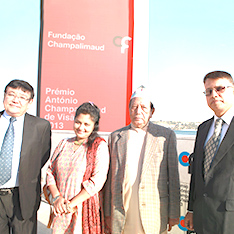