The 2014 António Champalimaud Vision Award is given to seven researchers for the development of Anti-Angiogenic Therapy for Retinal Disease.

This award confirms the importance of the research work developed by this group of scientists, which resulted in the discovery of an effective therapy for the treatment of two of the leading causes of vision loss and blindness in the world, age-related macular degeneration and diabetic retinopathy.

But more than the result, the award recognises the entire scientific process that led to it, and that had an impact not only in ophthalmology but also in oncology:

In 1971, Judah Folkman suggested that a substance secreted by tumours would accelerate cancer by increasing vascularization. In the 1980s, Napoleone Ferrara, began work that ultimately isolated and cloned a protein responsible for vascular endothelial growth - VEGF (“Vascular Endothelial Growth Factor”). Ferrara went on to develop a molecule to block VEGF’s action. Many investigators, including those with whom Ferrara shares this prize - Joan Miller, Evangelos Gragoudas, Patricia D’Amore, Anthony Adamis, George King and Lloyd Paul Aiello - working independently and together, often with Ferrara, went on to demonstrate the important role that VEGF played in ocular retinal disease, and how anti-VEGF agents could block its effect. For the first time, a pharmacologic intervention that significantly improves the vision of patients affected by these often devastating retinal conditions is now available.

The work of this year’s awardees covers the entire research process, from the identification of the molecule, to the elucidation of its role in retinal-vascular disease in animals and humans, to the experimental evaluation of an inhibitor and its final application in the treatment of affected patients.

The clinical value of anti-VEGF therapy has been well established through a large number of clinical trials in patients with neovascular age-related macular degeneration, diabetic macular edema and retinal vein occlusions, offering a real hope to millions of affected individuals around the world. 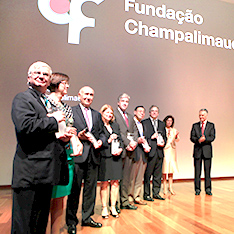