Ar Event - Evolving emotions: getting a feel for the world

Last Saturday, May 21st, Ar Events returned to the Champalimaud Foundation Auditorium after a more than two-year hiatus due to the COVID-19 pandemic. Under the title “Evolving emotions: getting a feel for the world”, the event was a celebration of women in science – who for most of our History were deemed unfit for the job for having no control over their emotions – emotions which were until recently considered, from Plato to Descartes and beyond, to be an hindrance to rational thought. 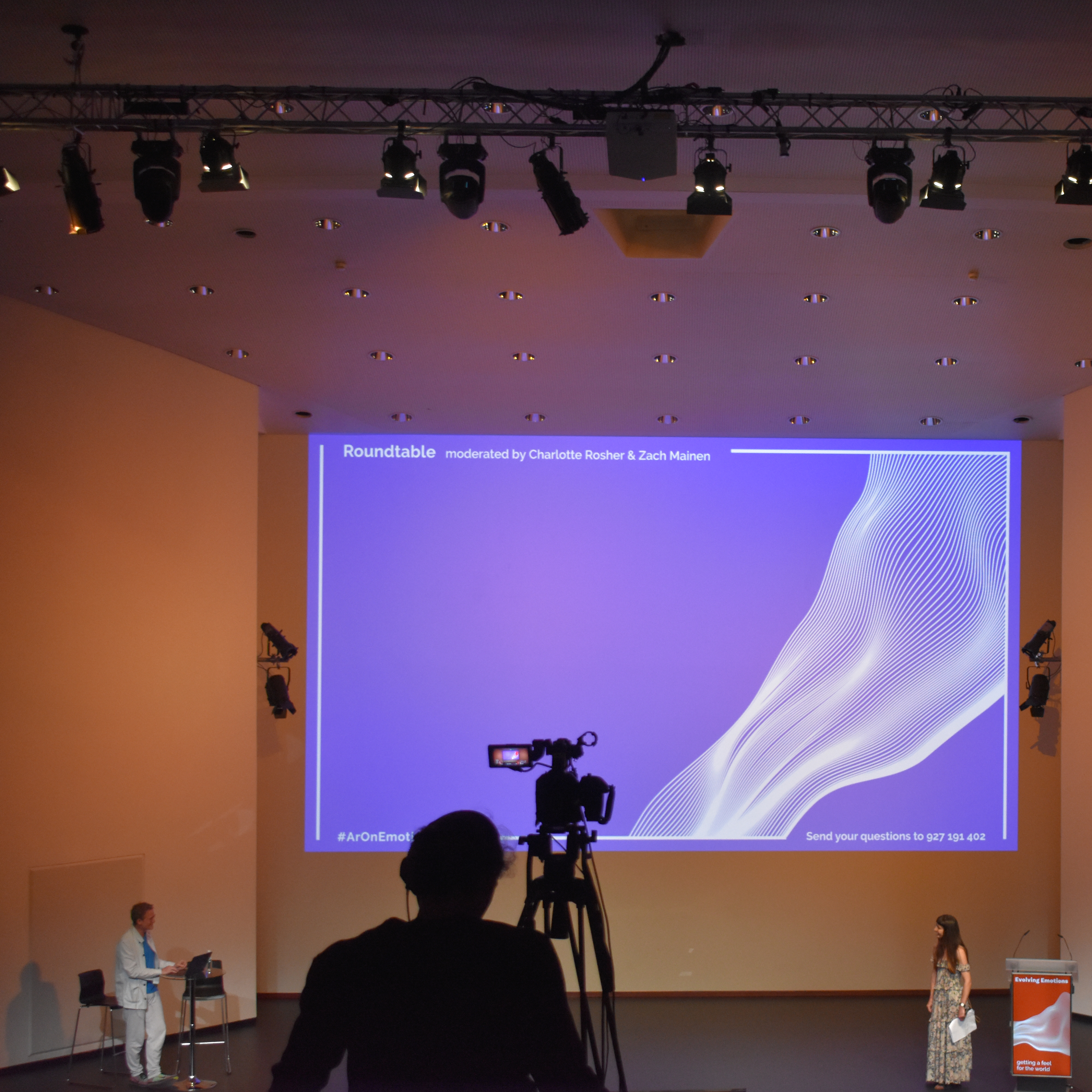 Today, the general view about the role emotions play in our lives has radically evolved, and the importance of emotions throughout the animal kingdom has finally been recognised. Charles Darwin already intuited 150 years ago when he wrote that emotions are “a universal means of communication” across the animal kingdom. As for us humans, we now know that emotions literally shape every aspect of our lives, including things as unique to our species as rationality and morality.

This change of paradigm has, in particular, rendered obsolete the idea (which predominated for centuries) that women’s “excessive” emotionality is an obstacle to their embracing successful scientific careers. With this in mind, the organisers of the first Ar event to again be held “in person” at the Champalimaud Foundation after more than two years, under the title “Evolving emotions: getting a feel for the world”, decided to dedicate it to women in science.

The event was held last Saturday, May 21st, as an integral part of the Emotions Brain Forum series of conferences celebrating women in science, itself an initiative of BrainCircle Italia, an non-profit NGO founded in 2010 by journalist Viviana Kazam and famous Italian neurobiologist Nobel Prize Rita Levi-Montalcini (1909-2012), a very outspoken advocate for women in science.

This framed the selection of invited speakers at the event, hosted by former Champalimaud Research neuroscientist Cecilia Mezzera. As Champalimaud Foundation President Leonor Beleza stressed during her opening speech, “all the invited speakers at this event are female scientists”. Women who all have made important contributions to understanding the interplay of emotions with such diverse phenomena as self-preservation, memory, empathy or language.

To introduce the topic, Adrian Razvan Sandru, a post-doc at the Champalimaud Foundation, gave a presentation on how, historically, the view of emotions as an obstacle to rationality has hindered the role of women in science for centuries.

The first invited speaker was Marta Moita, Principal Investigator of the Behavioural Neuroscience lab at the Champalimaud Foundation, who studies the most fundamental of all emotions, the one that is common to all animal species and ensures they survive their predators: fear. “Fear is a fundamental emotion present across the animal kingdom, and it plays an important role in navigating danger”, said Moita.

She talked about the three types of responses to fear – freezing, flight of fight – and about how the freezing response, which seems such a passive behaviour, is in fact a very active one. (She proved her point by making the public stand, without moving, in an awkward position). Just imagine crouching motionless, with your head down, in front of a charging gorilla (this is the recommended behaviour in this case: the gorilla will stop short of ramming into you and lose interest), and it becomes obvious how active your voluntary suppression of movement has to be in order to endure this ordeal – and probably save your life.

Moita does not study humans; she works with fruit flies, one of the best animal models for studying behaviour. “You may not know this”, she said, “but flies also have a heart. And just like ours, their heart speeds up in fear when facing a threat.”

Elizabeth Phelps, from Harvard University, who studies how emotions color our lives, and in particular how they alter what we remember, presented the second talk.

“Initially”, she explained, “researchers thought memories of emotional events – such as witnessing John F. Kennedy’s assassination in 1963 or a gruesome car accident – to be like snapshots, so-called ‘flash-bulb’ memories.” Vivid, detailed, and therefore veridical memories that didn’t fade or evolve with time. So, for instance, everyone was confident that eye-witness accounts were reliable enough to be uncritically admissible in court. But since the late 1970’s, research has shown that even the most emotional of memories can change over time.

So why do we get the impression that we remember such events as if they were fixed forever in our minds? Precisely because they are so vivid, so detailed, due to … their emotional content. “Emotion captures our attention and perception, so we see certain details [of emotional events] better”, said Phelps – and those are the details that our brain stores in memory. And if they are so vivid, how could they not be totally true, like a fixed snapshot?

Actually, said Phelps, we know today that the only difference between our memories of neutral everyday events and those of highly emotional events is that, in the second instance, “people feel highly confident about the accuracy of their memories”. This is not the same as the memories themselves being accurate. “Memory is not for the courtroom. But then, I’m not a lawyer”, she concluded.

Next on stage was Valeria Gazzola, from the Netherlands Institute for Neuroscience, who broached the question of emotions and empathy. She started by showing the audience a photo of a young child desperately crying and said: “if I ask you to tell me something about this picture, before describing the despair you see, you will feel it”. It’s called empathy and it happens because of the way our brains are built: parts of brain areas that are activated when we ourselves feel despair overlap with those that are activated when we see despair in someone else.

Just as emotions are not unique to humans, empathy isn’t either. “Rats have it” said Gazzola, who then described experiments in rats that show exactly that. “Rats share emotions, because feeling fear when another rat displays a fear response tells them that they themselves may be in danger too”, she added. This “fear contagion” is nothing less than an empathic behaviour.

But empathy is not always purely egotistical. “Emotion sharing could have evolved for selfish reasons”, Gazzola pointed out, “but it can also drive us to help others.”

She wrapped up her talk with a question that a number of us may have asked themselves, seeing all those TV series about serial killers: can psychopaths feel empathy, namely for the pain of others? Experiments show, she said, that if you ask a psychopath to empathise with someone in pain, he will. So the answer seems to be that these individuals do not lack the ability to empathise, but rather the motivation to do it. Gazzola’s take-home message: “We can voluntarily regulate empathy”.

Last but not least, Eva Jablonka, retired Israeli evolutionary theorist and geneticist, talked about the interaction between emotions and language in the course of human evolution.
For Jablonka, “language is a communication technology for instructing imagination”. And what is imagination if not creativity, which in turn is full of emotion? At the same time, we are very good at inhibiting our emotions, and to have secrets – a uniquely human capacity.

Language, she continued, gave us the capacity to describe the objective world, to doubt and lie, to have a feeling of free will, to thirst for knowledge, to have religious thoughts, to dance together, to make music together. Language can also give rise to new emotions.

“But language also makes us lose things”, she added. And by way of an example, she described the so-called “verbal overshadowing”, a phenomenon where giving a verbal description of some sensory input (for example visual) impairs the formation of memories of that input (for example of a face). “Verbal overshadowing decreases memory”, she said. Language actually blots out the visual scene.

“We are a very strange ape”, she pointed out. “We are a self-controlling species, not a self-domesticated species; we are more like wolves than like dogs.”

One privileged way of expressing emotions is obviously through art, and art could therefore not be absent from the event. So,  apart from scientific talks, there was also music and a virtuoso theatrical performance. First, the deep and mellow voice of Lula Pena, singer, composer and poet, took the public through the different emotional landscapes of her singular musical style. Then, Sofia Dias and Vítor Roriz, dancers and choreographers, presented a piece that, through the use of words, voice and movement, represented the rollercoaster, chaotic way in which the mind perceives and connects the myriad of things that happen around us.

Outside the Auditorium, people were invited to interact – before, during and after the event – with a multimedia installation about the colours and sounds of emotions created by Clo Bourgard and Tupac Martir, currently artists in residence of the Champalimaud Foundation. The audience could also take some time to explore in more detail the beautiful drawings of Anat Zeligowski, an artist and medical doctor living in the South of Italy, whose work was also presented by Eva Jablonska during her talk.

It was nearly midnight when all the participants gathered on stage for a round-table, moderated by Zach Mainen, Principal Investigator of the Systems Neuroscience lab at the Champalimaud Foundation, and Charlotte Rosher from the Moita lab, during which the performing artists were asked about their emotional state when performing, and all tried to evoke the emotions they had wanted to transmit to the public with their pieces. And then, after a six-hour impressive marathon, moderator Zach Mainen called it a night. 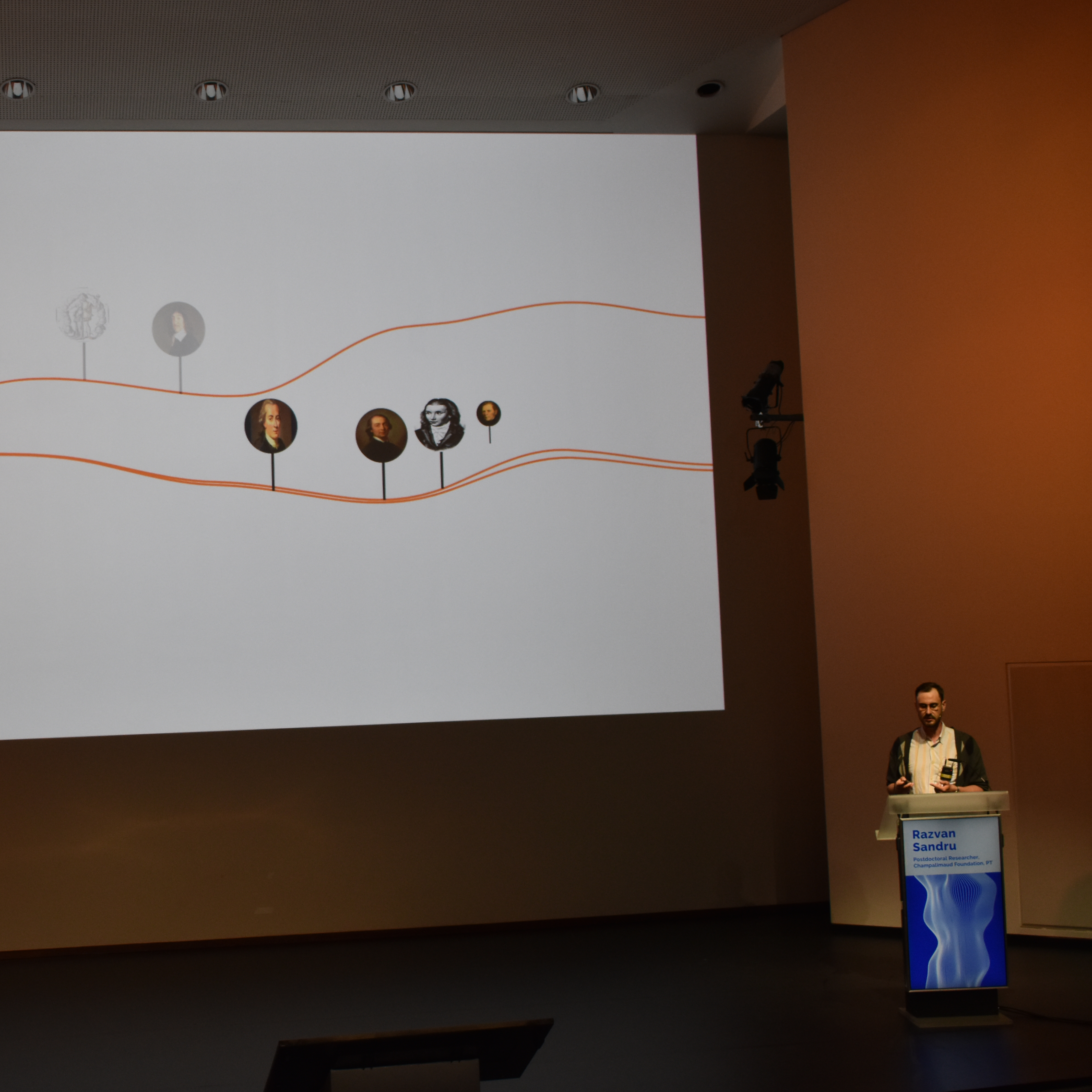 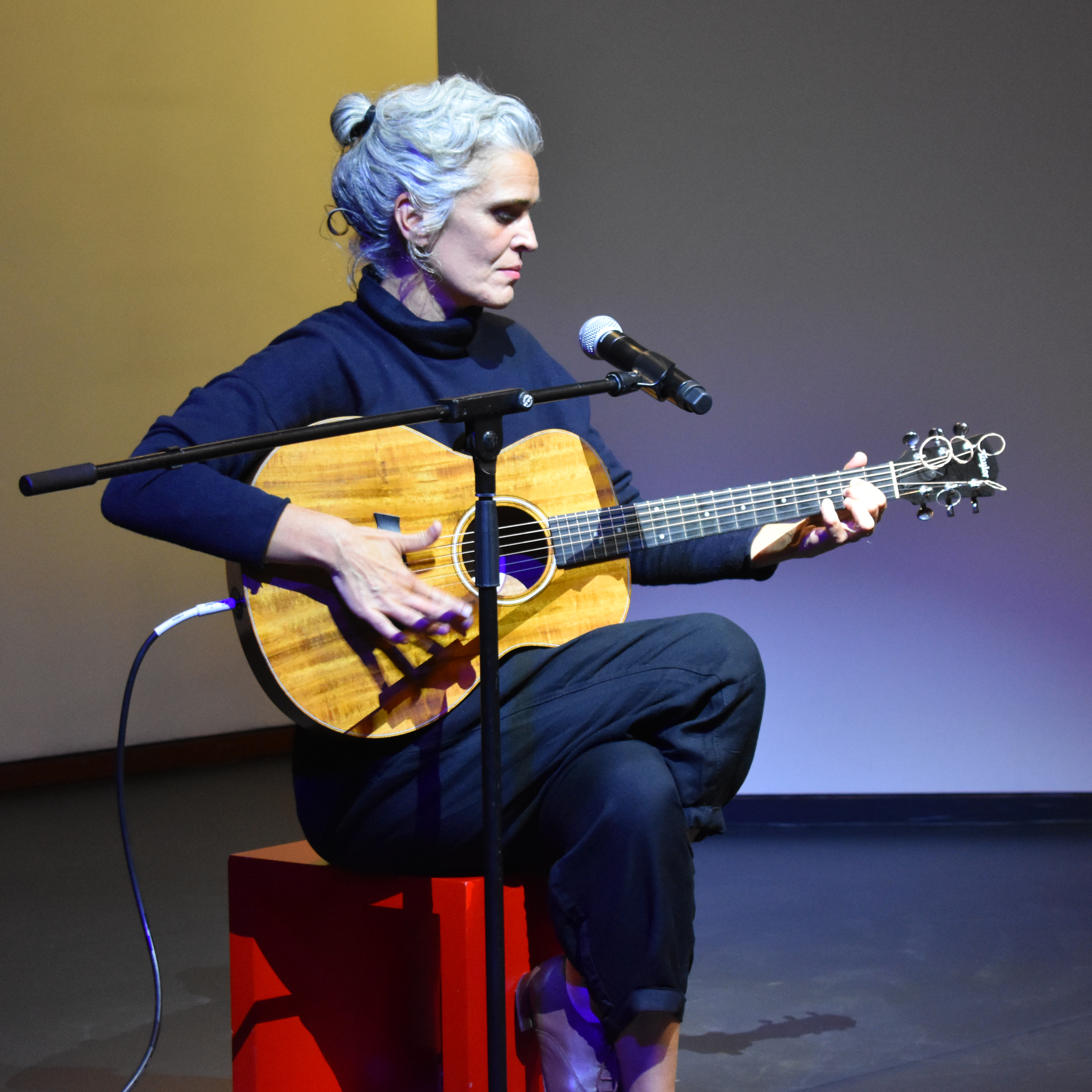 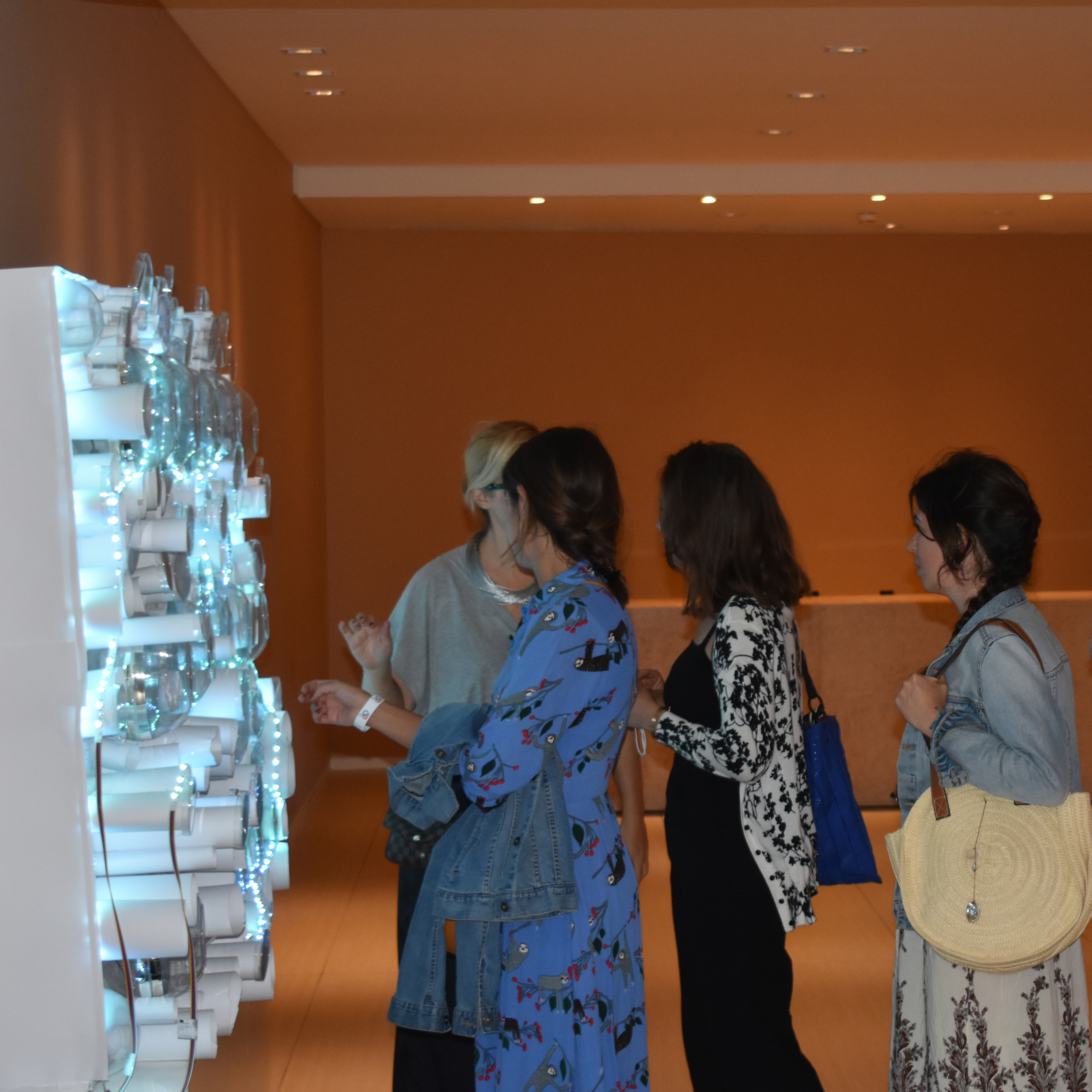