From the democratisation of robotic surgery, to the promising advances in personalised surgical biomarkers; and from 3D models to artificial intelligence, the Multidisciplinary Gynaecology Unit, like other pathology units at the Champalimaud Clinical Centre, is at the cutting-edge of modern oncologic medicine. 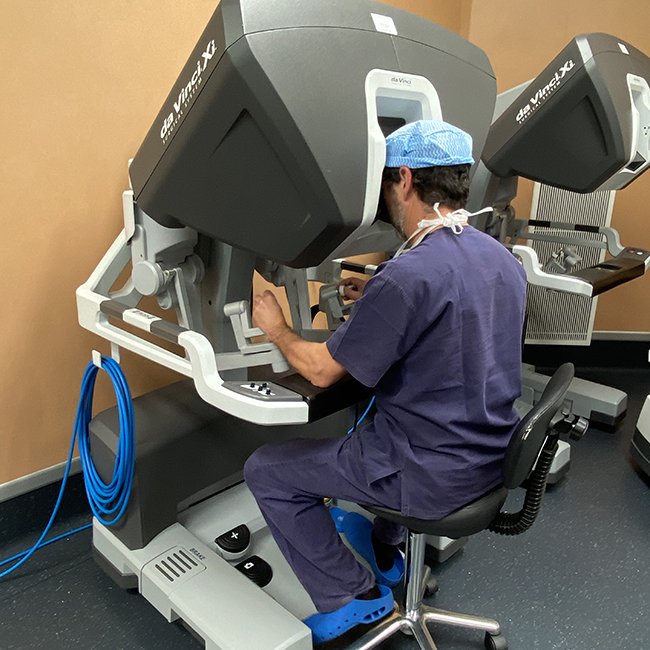 Dr. Henrique Nabais, Director of the Unit, explains why robotic surgery is vital in his specialty of oncologic gynaecology and gives us a view of the latest developments and reality of life in the Champalimaud Clinical Centre’s Gynaecology Unit, where robotic surgery has been available as a treatment option since 2017.

Could you begin by explaining what robotic surgery is?

Robotically assisted laparoscopic surgery, usually referred to only as robotic surgery, has had enormous success worldwide, with a very rapid growth, not only in number, but also in the complexity and diversity of surgical procedures performed in different surgical areas. In the last year alone, there has been a 20% increase.

The use of the robotic platform in gynaecological disease was approved by the Food and Drug Administration (FDA) of the United States of America in 2005.

In gynaecology, robotic surgery today is utilised particularly in gynaecological cancer, according to SERGS (Society of European Robotic Gynaecological Surgery), in the most complex surgical cases, such as endometriosis and with obese patients, especially in cases of morbid obesity.

A situation that has raised doubts from the beginning is the patient’s age, and whether that would be a restriction on this new surgical approach. Various studies have shown that age alone is not a contraindication. In fact, in addition to being safe for patients older than 70-80, lower intra- and post-operative morbidity may even be associated, in both the short and longer term, allowing for faster convalescence.

What are the advantages of using robotic surgery?

Because it allows a better visualisation of the surgical field, greater freedom and better control of movements, greater surgical reproducibility, associated with less tiredness for the surgeon (very important in longer surgeries) and in experienced hands, it will allow for a faster and safer surgery, with a strong impact on the quality of life of our patients and their families.

For patients, this innovative surgical approach has the advantage of making minimally invasive surgery possible in most cases, particularly in the most complex ones, without the need for an extensive scar on the abdominal wall, which significantly reduces pain. It is also associated with a faster, easier, and less invasive post-surgical recovery, which provides for shorter hospitalisation time. In this way, it is possible to have greater well-being and a faster and safer return to the desired personal and professional life.

Are there any situations when open or laparoscopic surgery is preferred over robotic surgery?

The main disadvantage (of using robotic surgery) that has been pointed out is the need for training of the surgeon/team, even if they already have excellent training in other surgical approaches, which means investing time and money, in addition to the critical need for motivation of the whole team.

Another supposed disadvantage, and that which has limited the rapid diffusion of this surgical approach, is its apparently elevated economic cost, due to the cost of the robotic platform, the disposable materials and the longer operative/surgical time observed during the team’s learning curve.

As you mentioned, robotic surgery can take more time to perform than other options, and may be more expensive. Is this a concern, and how can this be mitigated?

Today we know that, due to the increased experience of the teams, the rapid amortization of the increasing number of surgeries, the increase in the number of platforms worldwide and the launch of new platforms, there will be a significant reduction in costs in the near future. One of the main causes of the higher cost is the longer occupancy of the operating room, but in reality what we have been observing is that, with the increase in the experience of the teams, there is a significant reduction of that time, often becoming shorter than the other approaches. Furthermore, (robotic surgery) has been shown to be characteristically associated with a lower rate of complications and a faster learning curve when compared to classical laparoscopy, which translates into important benefits on several levels.

What has been the role of the Champalimaud Clinical Centre specifically in the use of robotic surgery in gynaecologic oncology?

The Champalimaud Clinical Centre has pioneered robotic surgery in Portugal in the context of gynecological pathology, with a particular focus on gynaecological cancer. The first surgeries were carried out at our Centre in February 2017, and now it is a routine approach with more than 200 surgeries performed and with excellent results for our patients. Oncological gynaecological disease treated in this way has so far been essentially uterine cancer (endometrium and others), ovarian cancer in early stages and some selected cases of cervical cancer.

According to the U.S. Society of Gynecologic Oncologists and the American College of Surgeons Commission on Cancer "one of the quality measures of centers treating endometrial carcinoma is the use of minimally invasive surgery (classical laparoscopy and robotic surgery) in stages I-III." At this time, about 90-95% of cases of endometrial carcinoma are treated in this way at the Champalimaud Clinical Centre.

Considering that so much has already been achieved, what are the plans for the future?

The Multidisciplinary Gynaecology Unit has participated in several international studies, being part of several multinational working groups, allowing it to be at the forefront of knowledge, future perspectives and even ‘blue sky thinking’.

Our Unit will begin, soon after the resolution of the covid-19 pandemic constrainment period, the robotic approach in other gynaecological pathologies with specific indications, namely in severe endometriosis and complex uro-genital prolapse.

I believe that robotic surgery will be, in the very near future, the main way to treat the vast majority of gynaecological diseases with surgical indication. This "democratisation" of the technique will allow all gynaecologists to use what we call minimally invasive surgery, with clear advantages for patients and institutions, both public and private.

Are there any research efforts being done in this field and what are the potential future uses?

This is an essential issue, since it is an area where there are multiple lines of research, constituting an immediate added value. The most promising are: the development of new biomarkers that will allow greater customisation of surgery, the use of 3D models that will enable more accurate and safer surgical guidance, as well as the use of artificial intelligence.

In my opinion, this is the path of no return for modern laparoscopy, with extraordinary future prospects which already constitute a definitive milestone in the evolution of surgical activity in general.

By John Lee, content developer of the Champalimaud Foundation. 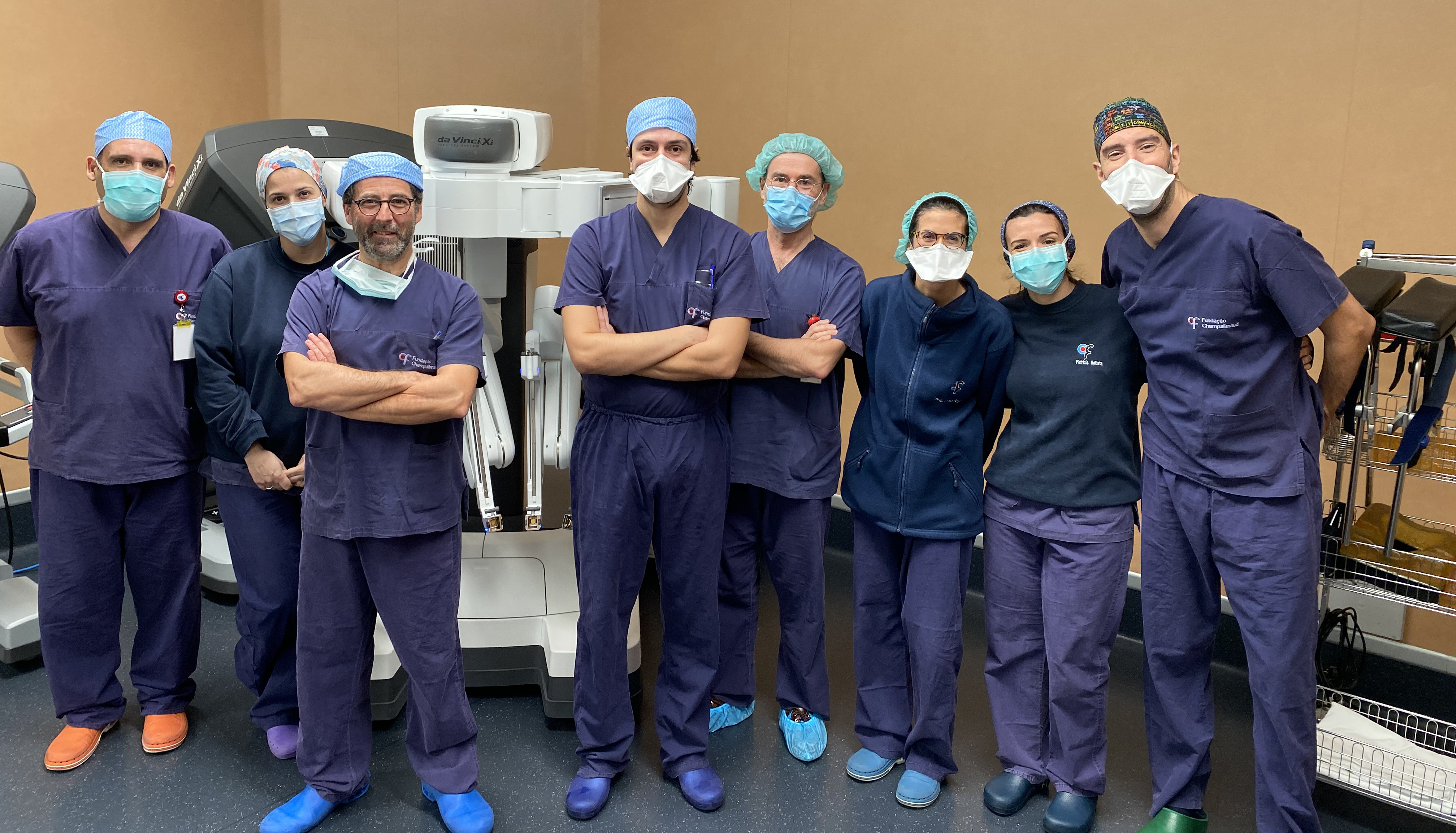