Multiple myeloma is a cancer of the bone marrow, that is, of the organ that makes blood cells. Currently, to diagnose myeloma, bone marrow samples need to be collected – an invasive procedure that is not always reliable. But what if it were possible to do the same thing – and even better and more – simply with a blood sample, a so-called “liquid biopsy”? A team from the Champalimaud Foundation has discovered a series of proteins, in the blood of multiple myeloma patients, that could allow oncologists to do just that. 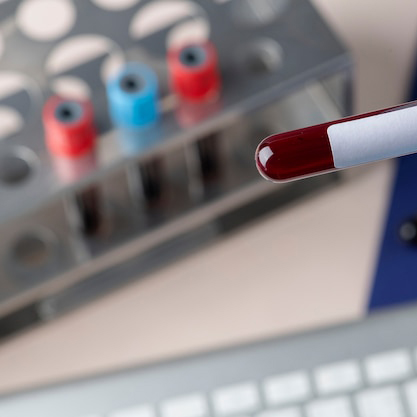 A study performed by the team of haematologist Cristina João, who leads the Myeloma and Lymphoma Research Group at the Champalimaud Centre for the Unknown, suggests that it may be possible, in a near future, to diagnose and monitor the progression of multiple myeloma (MM) by simply using a blood sample. Their results were published today (21/06/2022) in the journal Frontiers in Oncology.

MM is a cancer of the cells of the bone marrow – more precisely, of certain specific types of B cells called plasmocytes. B cells (or B lymphocytes) are the cells of the immune system that normally produce antibodies to protect us against outside invaders. But in the case of MM, anomalous B cells do not produce protective antibodies and proliferate out of control, producing abnormal amounts of monoclonal immunoglobulines. They form tumours, disrupting not only the normal function of the immune system itself, but also the generation of other types of cells by the bone marrow, such as red cells, causing anemia.

“Multiple myeloma is a tumor of an organ (the bone marrow) that lives inside another organ (bone)”, says Cristina João. So no wonder the bones are, so to speak, among the first victims of the disease: “Because there is an expansion of the bone marrow due to the proliferation of plasmocytes, which reside in the bone marrow, and that those cells also produce substances that make the bones more brittle, more than 80% of the patients suffer fractures. “MM destroys the patients’ bones”, the scientist explains. It can also cause problems in other organs, such as kidney failure or heart problems, when the tumoral lymphocytes or the molecules produced by the MM cells accumulate in those organs.

Multiple myeloma is the second most frequent blood cancer in adults. Normally, it affects people in their 70’s, with patients presenting (for the reasons already mentioned) recurrent infections, anemia, fatigue, bone pain and fractures. Nowadays, the average survival rate at five years is around 50%. “This is much better than 20 years ago” However, there is still a lot of room for improvement, including better ways to detect and follow these patients, says Cristina João.

Currently, MM is diagnosed by bone marrow biopsy. But this procedure, apart from being very invasive, has other setbacks. For one, it may not be reliable. As Cristina João further explains, given that MM tumors are very heterogeneous, either genetically or in terms of their irregular disposition in the bone marrow, the result of the biopsy depends on the site where the bone marrow sample was collected. This can lead to results that are not sufficiently representative and even falsely negative.

And that’s not the only problem with bone marrow biopsies, she says. There are precursor forms of MM that are not cancerous, that are asymptomatic, and that, in the overwhelming majority of cases, will never progress to multiple myeloma. These precursor forms are usually detected by chance in a blood sample and diagnosis relies on small (<10%) proliferation of plasmocytes in the bone marrow.. How can the risk of these “benign” forms of B cell anomalies evolving to multiple myeloma be reliably and less invasively assessed for each patient?

Identifying biological markers of MM in the blood

It was for these reasons that Cristina João and her colleagues wanted to know if there was a way of replacing conventional biopsies by “liquid biopsies” – in other words, by the collection of blood samples. Apart from being minimally invasive, liquid biopsies promised to be more reliable.

If it became possible to detect in the blood proteins that are specific of MM and only of MM, they reasoned, the diagnosis of this cancer would become much simpler and trustworthy. But, to turn this idea into a reality, they needed to identify proteins in the blood of MM patients that would work as specific biological markers of the disease.

In the study now published, the participants were patients at the Champalimaud Clinical Centre who had been diagnosed with MM or one of the precursor forms of MM, called MGUS (acronym for Monoclonal Gammopathy of Undetermined Significance), and also patients with so-called indolent MM or SMM (Smoldering Multiple Myeloma).

What the scientists did was to analyse the proteins contained in the “extracellular vesicles” of the patients. Extracellular vesicles are little “bags” that circulate in everybody’s blood. They are naturally released by almost every type of cell, are filled with proteins, genetic material, metabolites e and even components of the machinery of the cell from which they came, and they are a form of communication between cells. In the blood of patients with MM, there are numerous extracellular vesicles, including those released by the anomalous B cells, and it was there that the team looked for potential biological markers.

Using a specific technique to study proteins (mass-spectometry) they thus identified a set of proteins in extracellular vesicles with new biomarker potential: the names of those with the highest potential are APRIL, PDIA3, C4BPA, BTH1A1. “They are mainly proteins that regulate immune function”, explains Cristina João. And they are also proteins that, being different in MM and MGUS patients and from healthy blood donors, allow for the distinction between these two diseases.

“Since mass-spectrometry is not yet broadly available”, adds Bruna Velosa Ferreira, first author of the study, “we also investigated whether extracellular vesicles characteristics (by routine laboratory measures) could predict patient prognosis. We found, for the first time, that high protein load in these ‘little bags’ in the patients' blood is related to poor outcomes, including survival and immune dysfunction.”

“Our next step will be to validate and expand these results (we have an ongoing project with three hospitals in Lisbon). Our aim is to integrate these proteins in an evaluation scale (or score) with other prognostic markers, including genetic data, that could be used to obtain more reliable prognoses and to monitor multiple myeloma”, concludes Cristina João. 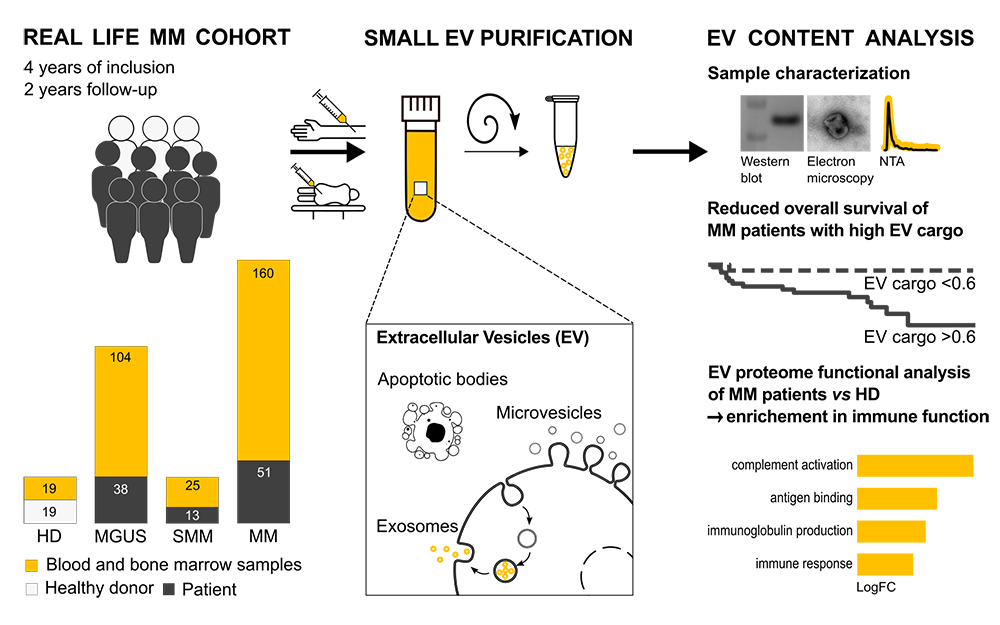 The paper visual abstract.
Back